What Is A Skort? 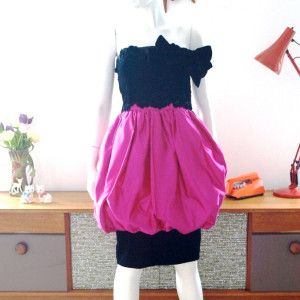 The year was 1987. Bob Hawke was our Prime Minister. It was the year Kylie Minogue released her first single, I Should Be So Lucky, and it was the year that Vietnam Vets were finally recognised for their service, albeit 15 years too late.

And it was the year that I first clapped my eyes on a garment known as the bubble skirt. Oh, be still my beating teenaged heart, if that did not quickly rocket to the top of my list of things that I would die from if I didn’t own it, then I would be I liar if did not proclaim this to be so.

It even knocked River Phoenix off my list of objects of desire.

As black and white striped bubble skirts began to appear on my friends, in Sportsgirl, and just on generally everyone I laid eyes on, I panicked and showed Mum the latest trend and begged, pleaded even, that if I did not get my ass into a phoofy skirt as soon as possible, then my social status would be forever cast out into the cold. And this will not do as a mere 14 year old.

And then Mum said the words that spread fear into my very being, every time they escaped from her lips.

“Oh they are simple. I will make you one.”

Looking back now, I can see she was well meaning. But Mum was not a good seamstress. YOU ARE NOW MUM! I HAVE SEEN YOUR QUILTING EFFORTS.

I gave Mum some very, very precise designing instructions. It was to have a thick, black elastic band that sat high up on my waist. (Oh waist, I remember you….) 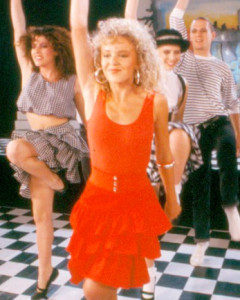 Of course, the result was a light blue, seersucker, and baggy puffball skirt down to below my knees. It hung from a thin strip of white hat elastic that was sewn into the top.

Because the short, short, magically puffy ones were… “Common!”

Which was the entire point!

So I attended all the birthday parties that year in my saggy bubble skirt while everyone else had a happier time because of their surrounding puffiness. And let’s not even start on the bodysuits underneath.

No wonder I was a moody, miserable teenager. I wanted to look like everyone else, but Mum’s Singer prevented me from ever really fitting in.

This memory came flooding back to me last weekend, when I attended the 60th Wedding Anniversary of my Grandparents John and Jope. It was a stunning, sunny day and as I walked into the function, I noticed a poor young girl had forgotten her pants.

She had long, brown smooth legs and a tiny, high bottom encased in, what would seem to be, a pair of bright white cottontails.

Had she just come from the beach?

However, I got more confused when she turned around….

I had not laid my eyes on a skort since I wore one at primary school, where they were prescribed as an antidote to avoid getting teased when you swung from the monkey bars upside down! I am also aware that the skort continues to be a very fashionable option for lady golfers, but to the knee if you please!

Unlike their cousin the culottes, who are a more of a pant type item, the skort has come screaming off some catwalk, somewhere, and into our stores.

And now I cannot stop seeing them everywhere.

The skort is a portmanteau of skirt and shorts. And it is not the first instance of two fashion garments mating and producing and offspring, however dodgy it might turn out.

Take my shumper that I used to swan the office in (skirt and jumper). You also have the option of getting around in jeggings, shants, shresses, treggings and burqinis, all the time swishing around your lob.

And that is the thing about fashion that I should not have feared back in 1987.

If you don’t get the trend right the first time, and depending on your age, you might have at least two more attempts in your lifetime to master it. PHEW!

Did your Mum ever try to make your “fashion”? Are you partial to a skort or any other sort of fashion hybrid?