THE 14 BEST BOOKS FOR KIDS THIS XMAS ‘You may have tangible wealth untold. Caskets of jewels and coffers of gold. Richer than I you can never be—I had a mother who read to me’

It will come as no surprise to you that I am a great believer in books as gifts. Because they are interesting, entertaining and informative, they can be used multiple times, shared, and do not require batteries (well, mostly!)

Over the next few weeks I’ll be bringing you all my best tips of what books to buy for Christmas, and this week we look at some of the best picks for the child(ren) in your life. As an added bonus, Potts Point Bookstore owner, Anna Low, joins us with some of her favourite gift ideas for kids this Christmas. Enjoy! 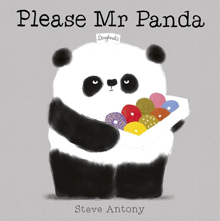 Panda has a tray load of doughnuts he would like to share with his friends. But every time he offers one to his animal friends they are very rude to him. “Give me a pink one,” demands penguin and it’s the same with all the animals until he reaches Lemur. Lemur is the only friend who uses the magic word “please.” This is a witty and stylish lesson in manners but it is Steve Antony’s adorable illustrations that make Please Mr Panda a little bit special. The Twelve Days of Christmas by Alison Jay

As far as Christmas themed gift books go, Alison Jay’s glorious rendition of the twelve days of Christmas is a stand out depiction of the familiar story. Her illustrations are simply wondrous and will inspire joy in early and pre readers alike as they see the poor lady’s gifts pile up. This collection of Enid Blyton’s Christmas stories will delight children still being read to as well as those able to indulge themselves. It’s a wonderful nostalgic romp that deals with all the important things about Christmas—Santa, presents, magic, mischief and lashings and lashings of Christmas fare! Okay, it might not tick the PC box these days but it’s hard to escape the influence of the marvelous Enid Blyton. The Wonder by Faye Hanson

This is a story about a boy whose head is always full of wonder. We follow him on an average-seeming school day, where his daydreams transform the world around him. Unfortunately, lots of other people—the park keeper, the bus driver, the lollipop lady—all tell him to get his head out of the clouds. It is only when he is given a blank sheet of paper in art class that he realises he can bring the wonder out of his head for the whole world to enjoy.

This is a truly beautiful picture book that celebrates the power and joy of daydreaming. The Illustrated Forest described Hanson’s work as “fantastical and awe-inspiring.” High on a cliff above the gloomy coastal town of Withering-By-Sea lives the orphaned Stella Montgomery and her three maiden Aunts—Aunt Condolence, Aunt Temperance and Aunt Deliverance. She escapes her miserable life filled with French conversation, deportment and needlework by spending imaginary hours in the Amazon via an old atlas. One night, realizing she has left the atlas open in the conservatory, Stella steals out of her bedroom to rescue it. She finds more than she bargained for. There are thieves stalking the hotel searching for a small package secreted away by Mr Filbert. What is in the package and why is the malevolent Professor so keen to secure it for himself?

Australian author and illustrator Judith Rossell is writing a new series for readers aged 9 and over starring Stella Montgomery. Although it s a Victorian fantasy-adventure, Stella is feisty, brave and determined making her the perfect heroine for a modern adventure. The writing is divine as are the illustrations and the book is published in a glossy paged hardback making it a perfectly packaged gift. The Imaginary by A.F. Harrold, Illustrated by Emily Gravatt

Amanda Shuffleup discovers Rudger hiding in her wardrobe. No one else can see him because he is imaginary. They do everything together and her mum doesn’t mind because she too had an imaginary friend when she was Amanda’s age. Her mum knows people who would drag their child off to the psychologist at the first sign of imagination but she is not most mums.

Then a strange man knocks at their front door pretending to be conducting a survey about children. As Amanda hovers behind her mother, she can see a thin waspish girl hiding behind the man but no one else can see her, except Rudger. Mr Bunting, as he calls himself, hunts imaginaries and now Rudger must run for his imaginary life. The question is, can Amanda save him before he fades away to nothing?

UK poet A.F. Harrold has written a sophisticated and enchanting magical tale celebrating friendship and the power of imagination. Thanks to the gorgeous illustrations by Emily Gravatt, it is also a book of great visual appeal. This will appeal to fans of Roald Dahl and Neil Gaiman and those who rather like a good dose of scary mixed in with their funny. The Mapmaker Chronicles by A.L Tait
Race to the End of the World

The king of Verdania is determined to be the one to map the world beyond it’s known boundaries. Rumour has it that the world is not flat and he intends to send three explorers and their crews to discover the truth. Quinn, a fourteen year old farmer’s son, is chosen to compete for one of the positions on the three ships as a scribe. He does not want to go but his family are poor and the money he will be paid is a fortune. He is chosen by the King’s slave Zain, who alone knows that though smaller than the other boys, Quinn brings a special gift. They set sail on the Libertas bound for an adventure beyond their wildest imaginings. To win they must bring back the most detailed map but danger lurks with a strange sea monster tracking their every move in the wild unchartered waters beyond the edge of the known world.

A.L Tait began writing The Mapmaker Chronicles when her sons asked her who made the first maps. The result is a rip-roaring adventure series bound to appeal to boys and girls alike. State of Grace by Hilary Badger

Wren is one of Dot’s creations. She lives in a garden of eden that has orchards, ponds to swim in, horses to ride and where free love is celebrated. Each day the creations must pick a bag of new fruit and pour it down the chute to send to Dot and they must live life by the Books—Fun, Kindness and Acceptance amongst them.

However, Wren is having disturbing dreams about a place that seems “prenormal,” as is Blaze. When a stranger arrives into their world, she starts to wonder what lies Beyond—that forbidden place outside their Utopian life.

This is Hilary Badger’s first foray in writing for teens but she is well established as the author of series for younger readers. State of Grace is a tale of a false Utopia and mass delusion but it is really celebrating how important it is to think for oneself and daring to step away from the crowd. Badger’s writing is fresh and powerful and she really knows how to talk to this teen audience. Lucy Lam wins the first ever “Equal Access” scholarship for year 10 students to attend the prestigious private school for young ladies, Laurinda. Her mother sews piecework in the garage, her father works at the local carpet factory. Lucy comes from the local Catholic high school where the students are a cultural hot pot. Laurinda is a foreign country. It’s not long before she realises that, “at Laurinda, mistakes mean annihilation.”

The school is stratified by privilege, personality and good looks. It is, and always has been, run by the Cabinet whose responsibility is to keep the so-called “Laurinda spirit” alive. This year the three senior girls are Amber, Chelsea and Brodie When they start to court Lucy, she does not know what to make of their attentions. Should she be flattered or fearful, or both?

This is Alice Pung’s first foray into fiction. She is a well known a lawyer and advocate. Her Cambodian parents settled in Melbourne where Pung has set Laurinda. Her personal background changing schools numerous times, having refugee parents and often being the odd one out has informed the telling of Laurinda in the most wonderful way. Lucy Lam, our narrator, takes the reader on a journey through a tantalizing world of prestige and opportunity so at odds with her own background on many levels. Beautifully written, compassionate and witty, Laurinda is an extraordinary book. For which teen hasn’t battle with those twin ogres, belonging and sense of self? Apple and Rain by Sarah Crossan

Appollinia Apostolopolous, Apple, has been raised by her Nana since her mother left one stormy Christmas night eleven years ago. Her Nana babies Apple, never letting her play with her friends and still picks her up from school each afternoon, even though Apple is now thirteen.

Every dreary Christmas is one of yearning for her mother’s return but this year Apple gets her wish and Annie, now with shiny hair and perfect American teeth, returns. The question that has bugged Apple for all those years, why did you go, hovers on the edges of their bittersweet reunion. For it turns out that Apple is not her mother’s only child, she has a younger sister called Rain. Living with her mother and sister soon sees Apple taking on the adult responsibilities that should be Annie’s. Apple does the shopping, looks after Rain, missing school and the teenage life that is rightfully hers.

Sarah Crossan has crafted a beautiful heartrending story of love between mothers and daughters that is full of tears and laughter. What could be a bleak tale is saved by Crossan’s wonderful characterisations and the way she uses poetry as Apple’s means of indentifying her feelings of loss and solitude in a meaningful way. Apple and Rain is nominated for the 2015 CLIP Carnegie Medal—the most prestigious prize for children’s literature. 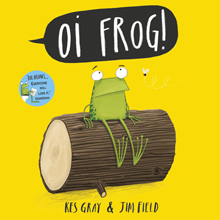 For the young there is one picture book that I have enjoyed reading and recommending above all others this year and I feel that no household should be without it. Oi Frog! by Kes Gray is a very, very funny rhyming book about animals and where they sit. The bossy grey cat teaches the frog about the order in the animal kingdom—frogs sit on logs, lions on irons, parrots on carrots and on it goes until the frog learns a tough lesson. It is a joy to read from start to finish and passes my 100th reading test. For non-fiction titles there are two gorgeous books both that form a beautiful pair about the natural world. Animalium by Katie Scott & Jenny Broom and Maps by Aleksandra & Daniel Mizielinski. Animalium is subtitled Welcome to the Museum and is a catalogue of the natural world. It maps the tree of life and celebrates the amazing diversity of life on earth from tiny insects to birds, mammals and sea life. Maps: Travel the Globe is a collection of very detailed maps of the world. Each map includes major landmarks, people, animals and both geographic and political information in the most appealing and compelling way. I could spend hours poring over the information in this book. I would recommend these books to anyone who loves the natural world aged from 8 to 108. Two Player Big Book of Fun by Lydia Crooks is a brilliant book filled with puzzles, word games, mazes and loads of fun things to do. The best thing about this book is that it is designed for two people to play together. Some of the games are competitive and others collaborative but it will provide endless hours of entertainment on a summer’s day or a family holiday.