WTF IS ‘HAVING IT ALL’ ANYWAY? 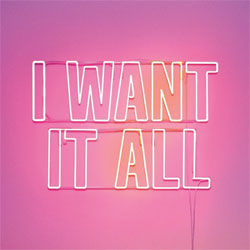 I don’t know what makes me want to block my ears and yell ‘la la la’ more: being told that I can’t ‘have it all’, or being told what ‘it all’ actually is.

According to the bazillion breathless articles written over the last six months, I can’t be happy unless I manage to be the perfect wife, perfect mother and perfect CEO all at once.

It’s as if the 1950s housewife has met the 80s corporate super bitch and if we can’t manage to be both at once, we’ll never ride off into the sunset driving a Corvette and smelling like cookie dough.

What fresh, groupthink hell is this?

Of all the middle-class, privileged, Western existential crises, this one irritates me the most. The ‘Oh god, why can’t I have it all?’ lamentation isn’t a worldwide, or even widespread, phenomenon. And it beggars belief why feminists are taking it seriously.

I’ll wager that most working mothers don’t relate even one iota to the highly successful women who are now either bowing out of their 100 hour a week jobs, or regretting that they never had children. These highly successful, highly prominent women don’t represent ordinary people. They are not the face of a disturbing trend, they are an exception to the rule. (And let’s not mention all of the mothers who have remained in highly paid, highly successful careers–that would undermine the hysteria, wouldn’t it?)

While endless columns are being written about how all of us are doomed to be miserable for the rest of our lives, most of us are wondering what the hell these journalists are talking about.

I don’t think the mum hiding out in a domestic violence shelter gives a flying crap about yet another female CEO complaining that she couldn’t work 17 million hours a week plus bake bread for her three teenage children every morning. I think she’s probably wondering why she can’t get the legal system to effectively protect her from her violent husband.

And I don’t think there are too many working class women out there, pulling a night shift before driving their kids to school, who are even slightly concerned about some rich woman lamenting that she should have married a man she considers her intellectual equal.

This isn’t productive feminism. I’m not even sure it is feminism at all. It seems to me it’s a lot more like a few wealthy people having a mid-life crisis. For some women, ‘having it all’ would simply be a night to themselves, or having enough money to buy their kids a new school uniform, or having a roof over their heads. Trying to juggle global travel with your child’s polo competition is not a feminist crisis. Everyday, ordinary women still not earning the same as men and suffering disproportionately from violence is a feminist crisis.

Half of the problem seems to be stemming from what a perfect life looks like. It’s not enough to be a mum, have a partner and have a job. It’s about having a blemish-free and highly successful life in absolutely every regard. The women claiming that they can’t have it all are so fantastically beyond the normal world that it’s hard to believe they live on the same planet.

If these women are now second guessing their past decisions, then I genuinely feel compassion for them. But their personal experience (did I leave kids too late? did I marry the right man? did I put too much focus on my career?) isn’t really a feminist issue. There are men who are also wondering the same things and there are men who have also left top tier jobs to spend more time with their families.

Perhaps we shouldn’t be looking at this as a woman’s problem. Perhaps it’s more a Western problem where we are increasingly demanding excessive wealth through excessive work, plus a utopian fantasy of parenthood that is completely unobtainable.

There are plenty of women and men who are quite content with their lives just as they are. Some are in relationships, some are not. Some have kids, some don’t. Some are working parents, some are not. Since when did we decide there was a checklist to a perfect life and women weren’t making the cut?

Which leads me to the part that really drives me bonkers: what the hell does ‘having it all’ look like anyway?

Not all women want children

Not all women want a life partner

Not all women consider that being freakishly successful at everything in the entire world at the same time is ‘having it all’. Some women might even think that sounds bloody exhausting and somewhat pointless.

Having it all can be anything you want it to be. It doesn’t have to include the holy trinity of husband, child and career. It’s a profoundly limiting vision of what a ‘successful woman’ should look like and is simply replacing one stereotype with another.

When the feminist debate is hijacked by issues that concern only 1% of the female population (if that), you’ve really got to wonder where the relevance lies.

Surely more column inches spent on our blasé attitude toward domestic violence, women’s opportunities to work in general (not CEO positions) and education would be more worthwhile.