THE ULTIMATE GUIDE TO DIVORCE My parents got divorced back in the early 80s, at a time where you were unkindly told that you came from a “broken home” and were given sympathetic looks from the mothers of your classmates.

“BUT I GOT A PONY! And Dad takes me to McDonalds like… ALL THE TIME!”

Back in those days, I was the only kid in my class whose parents had separated and consequently divorced. This is a bit different to nowadays, where a third of Australian marriages end with the decree absolute, which is a fancy way of saying done and dusted.

The year my parents called it quits was also the year I could have a birthday party. You see, my Mum was a believer in having a birthday party every second year. This was in the era when you actually had a birthday party at your house and didn’t palm it off to some filthy play centre where you ate chicken nuggets and consequently vomited in the ball pit. 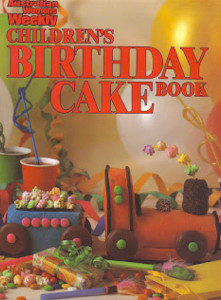 A proper party. With party outfits and pass the parcel, with musical chairs and pin the tail on the donkey.

Party Year was the BEST year, and we would all spend at least six months pouring over a little book we liked to call the fancy cake book. You know the one?

Ah Woman’s Weekly, you really did make all my dreams come true.

But, in the cut-throat world of magazines and in an era where titles seem to be folding on a regular basis, the good folks at Bauer Media Group, publisher of The Australian Women’s Weekly, have recognised that times have changed and you must piss or get off the pot.

With that in mind, they have recently released a new title to their stable.

I give you The Australian Women’s Weekly Ultimate Guide to Divorce.

Proving that you no longer need to turn to the AWW just for all things Royal, cooking and the like, they have now produced a handy guide to getting through one of the most traumatic times in your life. 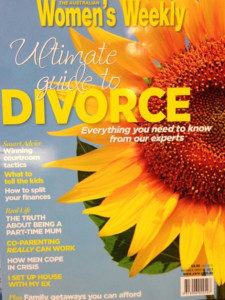 I feel that the sunflower on the cover is a nice touch. A symbol of growth and sunshine, something that can inspire you after you have spent time being emotionally and financially smashed into the ground.

The Australian Woman’s Weekly is a very trusted brand, and now you can rely on them to help you navigate all the curve balls that are firing at you, left right and centre. Sourcing information from leading experts, flop on the couch with a cuppa, like they do in the ads. You might need a phone, a pen and notebook, and a big calculator to start.

Personally, I am not one of the third that require this guide just yet, but I do know many mates who have found themselves part of divorce statistics. Like the friend whose husband ran off with the husband of her best friend. Do they have a section for that?

The Woman’s Weekly Ultimate Guide to Divorce has managed to transition into the field of personal development in the blink of an eye. However, I do have a few thoughts, which I would like to share.

Magazines make money from selling advertising space. I am wracking my brains to come up with potential clients for this guide. So far my list includes vodka and other fermented spiritual offerings, singles’ dating websites and of course lawyer’s contact details.

Where does it fit? By this I mean,in what section would newsagents put this publication? Financial? Far away from the Wedding Mags? Health and Well-Being? Craft?

What about men? Do Zoo Weekly, GQ or the little known but much loved Beer & Brewer have a responsibility to guide our men folk through this journey?

And what about discretion? If times are just a bit rough in your relationship and you are thinking about heading down the divorce path, do you ask the shopkeeper for a discrete brown paper bag? Keep it in the car? Stash it under your bed? Or should you just drop a hint and leave it next to the toilet with a copy of Pig Shooters Weekly? Or you could perhaps line it up nicely on the coffee table, in between the remote and a box of Kleenex.

And now, my lovely Hooplarians. Let us brainstorm together, shall we?

If you were asked to submit an article for the Australian Woman’s Weekly Ultimate Guide to Divorce, what would be your area of expertise?

Or would you prefer to read about fancy birthday cakes?