There’s been much talk lately about Families Minister Jenny Macklin’s insensitive and dismissive comments regarding her ability to live on ‘the dole’.

While currently sitting on an alleged $6,000 a week salary, it beggars belief that she felt entitled to make such a bold claim.

I can talk to Jenny about living huddled beneath the poverty line because for 12 years I did, while trying to raise three little boys on my own.

Even with the piddly, cash-in-hand cleaning jobs and the ironing baskets, I still found myself regularly lining up, tearily begging charities for a food parcel so I could feed my children. The food parcels would usually contain non-perishable items such as two-minute noodles and cans of tomato soup.

No meat, dairy or fresh fruit and vegetables. 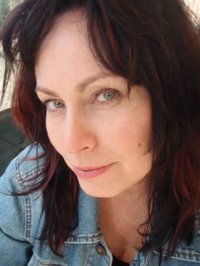 Nikki walked the fragile line that meant the difference between surviving… and not. Image: National Features.

As a single mother with three small children, I was not a contender to share a house with anyone. My rent for my ramshackle unit in Sydney was almost three-quarters of my single parent pension. I couldn’t afford a phone and we were regularly without power for days on end.

The kids were dressed in clothes from thrift shops. Their toys were all second hand. Each year, Santa was a jolly fellow from the Salvation Army who handed out donations to the disadvantaged kids assembled for the free Christmas lunch.

The idea that child support eases the burden from government hand-outs only works if the non-custodial parent works! Rather than finding a warm and supportive community to be that ‘village’ that raises our children, I found hostility and ostracism – from Centrelink staff to schools to employers.

With three children it was hard to find a job because employers rightfully believe that you may need to take more time off to deal with the inevitable childhood illnesses that crop up. During those pre-chicken pox vaccination days, I spent one whole month caring for spotty little people.

I couldn’t afford a car, so the round trip to school took one hour each morning and another in the afternoon, cutting short the hours I was able to work. The generosity and flexibility offered by private householders looking for a cleaner was what got me over the thin and fragile line between just surviving and…not.

Other unscrupulous businesses exploited this quiet army of single mothers grasping for domestic cleaning work. I was once hired to work for a holiday resort which informed me that they paid $15 for the cleaning of each cabin. Each cabin took about an hour and a half. During my induction period, however, I was to be paid half of that until I had been fully trained. That was a sum of $7.50 for ninety minutes of hard work.

After declaring this work to Centrelink I had about forty cents in each dollar taken out after making more than sixty dollars a week. On top of this, I had to pay for after-school care and arrived home with my little family at about 6.30 each evening, chronically exhausted.

I decided to enrol at university and studied externally. I did this full time because there was no extra government assistance unless I took on a full study load. This meant I stayed up each night until three or four, studying. I couldn’t maintain the grueling work and lack of sleep and only managed one year. I persevered through that year like a deranged zombie because I made an extra sixty dollars each fortnight to help with my study costs.

Family and friends were the only way I survived that 12 years. It certainly became easier as the children got older and my eldest boy could play latch-key leader of an afternoon.

Jenny Macklin might think it is possible to live on the dole, but this is what it looks like. Forget the glass ceiling that corporate women fight to smash. There’s a wooden one way down near the ground and it’s a hell of a struggle to hack it apart.

Ninety percent of dole recipients live in a state of deprivation and poverty. It is a cruel maze, difficult to escape from and not one any parent would choose willingly. To blame the poor for their condition is to crawl back to post-industrial England.

The poor in Australia are the convicts of our generation.

Nelson Mandela said: “Overcoming poverty is not a task of charity; it is an act of justice.” He points out that poverty is not a natural state, but a man-made one that can be overcome by the actions of human beings.

“Sometimes it falls to a generation to be great.”

That doesn’t sit well with Julia Gillard’s government; a government that will force all single-parent payment recipients onto Newstart when their youngest child turns eight.

This will, for many, represent the difference between surviving… And not.