It is a famous scene in Gone with the Wind when, after having given birth to a daughter, Scarlett Butler (Vivian Leigh) is holding on to a bedpost as her faithful servant Mammie (Hattie McDaniel) is cinching in her corset.

After an attempt, Mammie wraps a tape measure around Scarlett’s waist and gives the result.

“You’ve simply got to make it eighteen and a half again, Mammie,” says Scarlett.

Already in the throes of an eating disorder, as I watched that scene as a teenager, that number of eighteen was implanted into my brain – the challenge had been set.

But the initial challenge was soon superseded by the goal of seeing how low I could get my weight as the kilograms kept dropping off. It wasn’t until I was home from university for holidays when I found myself at an idle moment in my mother’s sewing room, did I spy a tape measure and I remembered those lines of dialogue.

Thinking I would never come close, especially in light of the fact Scarlett had corseted assistance, I wrapped the tape measure around my waist, watching with some satisfaction as the numbers got less and less: under twenty inches, under eighteen and a half … under eighteen … seventeen. 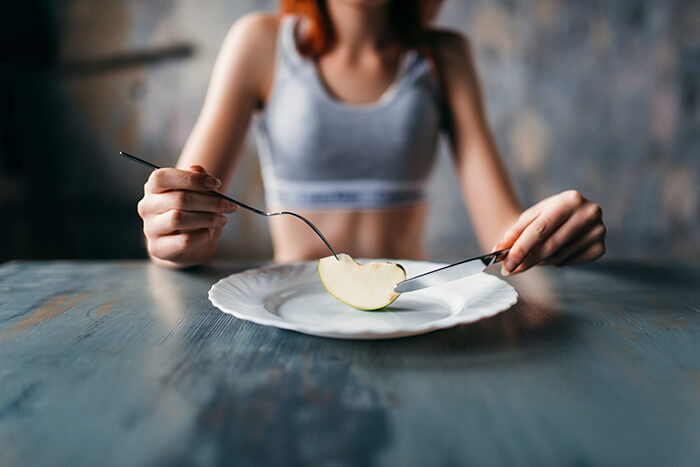 Then it stopped. Seventeen inches.

It was only then did I get my first real shock. I had succeeded without knowing. But it didn’t feel like a victory. Instead, I felt horrified.

My hair was falling out; I’d nearly set myself on fire twice because I was so cold during winter. Only then did I understand why my partner’s hands could span my waist. It was at around this time when I fully resolved to make a recovery.

The lying, the self-destructiveness and jeopardizing of my health (not to mention life) just wasn’t worth the frightening pursuit of thinness.

A decade has passed since this acute period of disordered eating, and over this time I have observed that it’s not unusual for each generation to locate causes of eating disorders from within its own cultural landscape.

Such link-tracing is not done without (for the most part) considered and well-intentioned analysis, but these causes or triggers do not have a simple ‘one for all’ application. For example, I was struggling in the mid-1990s ‘heroin chic’ high period, when Kate Moss would stare out of monochrome billboards with doleful eyes and these images did not really even register beyond a first glance.

I did not aspire to be a supermodel, especially once I started writing about these issues during a cultural studies degree. I could unpick what implications these images had on gender and power, I could espouse the language, do tutorial presentations – all within minutes of ridding my stomach of its lunchtime contents.

I felt that they didn’t apply to me because my ‘aspirational’ subject just happened to be located over fifty years in the past.

I rarely write about my eating disorder history – or relapses – and only do so when I’ve felt really drawn to an idea or the desire to tease out something new. This is why I’m writing this now.

There was an exhibition in Melbourne recently at the Australian Centre for the Moving Image called ‘Hollywood Costumes’ where the public had the opportunity to come see some of the most famous costumes in cinema history. I went along with my young children and husband, not knowing what I was going to see, wanting to be surprised.

It was busy, the crowd shoulder-to-shoulder. As I rounded the first corner, mere seconds into the experience, there was a dress from Gone with the Wind: Scarlett’s opulent and textured velveteen ‘green curtain’ dress from before her marriage to Rhett Butler; specifically, when she had her pre-baby ‘tiny’ waist.

As my own children trotted on oblivious, I stood before this dress, feeling memories wash up over me. I choked up with tears.

At first, I felt saddened, but little by little I realised it had lost its power: I had moved on in my life. One of the main purposes of the exhibition was its exploration of “the central role costume design plays in cinema storytelling”.

This storytelling is also how we come to understand our own place and purpose in this world, be it through movies, writing, or simply living.

I finished looking at that dress and walked on, tipping my head as I went, paying respect to it, and to myself. We’re both still here.