CAN MEN BE FEMINISTS? A debate erupted on Twitter recently (I know, I know, turning mountains into mole hills is almost the sole purpose of our little 140 character friend) but it was not the argument itself that intrigued me, but how it unravelled. When the dust settled and the original spat had virtually disappeared up its own intellectual orifice, it become a tit for tat about who were the better feminists: girls or boys.

The basic tenet was this: male feminists can abuse female feminists because we’re all feminists together and therefore there’s nothing sexist about it. If you leave that circular argument chasing its tail for long enough, it’ll drill itself down further than a coal seam gas plant.

I abandoned the whole exchange after that, but it got me thinking about why men calling themselves feminists has always irked me.

I’m not saying men can’t have opinions on women’s issues, I’ve read many excellent articles, written by men, that support and further feminism.

However, they tend to be written by experts in sociology, psychology or economics.

They’re not often written by blokes who have dropped an incongruous paragraph into their blog about why they call themselves the bastions of women’s rights. And that seems to be happening more and more often.

Whenever I read the phrase “I am a male feminist”, it makes me question the motive for  the article. Was it written to shine a light on a particular issue? Or was it written in the hope of getting validation from women? If it’s the latter, I’d like to ask those men to please stop junking up the internet with their neediness. We need that space for hilarious YouTube videos of cats.

Even if you’re a well-respected, highly qualified academic, I’m going to be creeped out by you calling yourself a feminist.

And that’s because I’ve seen the title misused more often than used well.

For a start, every time I read phrases such as “despite how many times I’ve been attacked for calling myself a male feminist…” or “I don’t care how many people criticise me for saying this but…”, I want to stab a pen into my own eye.  Please. Just stop. If you want to be a  martyr then go on a date with Kyle Sandilands.

I suspect these statements are a way of saying, “See ladies? I know what it’s like to be you.” If that’s true, then it’s gross. It would be horrific to define the experience of being a woman solely by how many times she’s been made to feel crap. If that’s what these guys think it means to be a chick, then they’ve been taking Mad Men way too seriously.

The ones that annoy me the most are the guys who use the F word to excuse their own sexism.

The rise of the blog has seen the rise of the man declaring himself a feminist and, hang it, he doesn’t care how many bitches out there attack him for it. And yes, he’s allowed to call women “bitches” because he’s a feminist. He can also tell us to eff off, call us the c-bomb (ironically, of course) and tell us we are stupid, ill-informed and irrational. Because you see, lady feminists sometimes say those things to each other and that means he can too. He’s proclaimed his own glorious impunity. 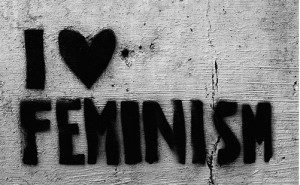 If only this was limited to the online world, I might be able to ignore it. Unfortunately, these people are allowed out of their houses.

Most of the conversations I’ve endured in the company of these men follow this pattern:

Mr Male Feminist, after a couple of drinks, drops his two cents into the discussion. He says something that some people agree with and some people don’t.

Mr Male Feminist then attacks the women who disagree with him and accuses them of not understanding feminism properly.

Sometimes dictionary definitions are wheeled out to further prove the point, often the work of Madonna is used as an example—of what, I’m not sure.

The discussion then segues into a dissection of the feminist movement as a whole and Mr Male Feminist explains that women’s rights would be more successful if the irrational people got out of the way and let the sensible people like him take over. He goes on to explain that it’s not that men are better than women it’s just that Mr Male Feminist, who happens to be man through no fault of his own, is a better feminist. And if you disagree with that, you’re a man-hater.

It’s at this point that I start downing shots.

Of course not all male feminists act like that, just some. It’s probably more an insight into my social circle than the world in general.

However, my least favourite feminist dude is the one that genuinely believes his insight into the female experience is the same thing as actually being a woman.

The argument goes something like this: “I know women, I have dated women, I have a mother, I have a sister, I know a woman who has been attacked or abused and, because of this, I understand completely the experience of being female. This means I have a right to call myself a feminist and if you want to question one of my essays, blogs or tweets, then that would sadden me greatly. I don’t want to sound patronising, but as you obviously don’t know as many women as I do, and even though you are a woman yourself, your point of view is not as valid as mine.”

I am not saying that men cannot support women’s causes.

I’m just not okay with men calling themselves feminists if they are trying to justify something other than a feminist point of view. Consciously or not, using the word to create a smokescreen that obfuscates an underlying motive is not acceptable.

Perhaps we could skirt the whole problem by men saying “I support feminism” instead of “I am a feminist”. Although the word “support” may be too subservient for some. The other option is for men to treat women with respect without needing a title in return.

That would free up loads of internet space for cats.