How to manage the stream of asylum seekers coming on boats continues to be one of the most polarising debates in Australia. And conversations at my family dinner table are no exception.

My mother fled Lebanon during the civil war in the 1970s. Her family escaped persecution from a country divided on religious and ideological grounds. She witnessed many atrocities and deaths before finally leaving her small village and setting for Australia by plane where she was welcomed with open arms.

In 1970, Australia repealed the restrictive White Australia policy framed in 1901. Over the next decade Mum was one of 960,000 migrants and refugees from Vietnam, Europe and the Middle East to settle in the “Lucky Country”.

More than three decades later, one in four Australians were born overseas. And surprisingly, many of them have conservative views about immigration.

My mother was a Labor voter for most of her life.  More recently she’s switched to the Liberals in favour of Howard’s infamous “We will decide who comes into this country” stance. She’d like to see an end to all immigration from the Middle East citing the crime, welfare and unemployment figures as proof that immigration “isn’t good anymore”.

Shocked and unable to sway her views, I endeavoured to find out what’s behind such thinking.

“We came the right way,” many immigrants say.

Candidate for the Eastern Melbourne seat of Chisholm, Liberal candidate and former Vietnamese refugee, John Nguyen (below) shares my mother’s sentiments. He came by boat, yet pledges to stop the boats.

Nguyen says his family came to Australia the “right way”, because they sought asylum in Malaysia which is the first country they arrived in.

They were later processed and brought to Australia. But now, Nguyen wants the integrity of our borders upheld. 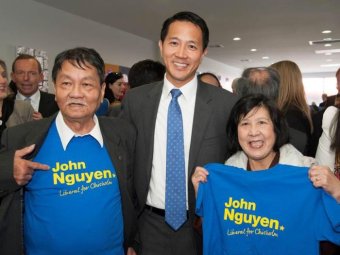 This baffled me. I wanted to know more.

So I visited ethnic hubs across western Sydney approaching shopkeepers, mums and couples dining at cafes and simply asked: “Do you think we should end immigration and stop the boats?”

Overwhelmingly, people said “yes”. Some even demanded I take their photograph to put  alongside, and validate, their opinions.

While I’m not suggesting my methods are the most qualitative and findings definitive, it’s certainly food for thought.

It’s a “no” to the poor and those fleeing war.

Claude Obeid came to Australia from Syria in the late 80s and while he says he sympathises with the hundreds of thousands of Syrian refugees (uprooted from their homes after months of bloody civil war) he doesn’t want them settled here.

“Maybe if  we only allowed people from other areas of the world – not where there is trouble and poverty.”

I was dumbfounded. I remind him that he is Syrian.

Still unable to make sense of it, I decided to phone-a-friend. It was time to call in an expert.

Dr James Jupp is a migration and multiculturalism academic at the Australian National University. He begins by telling me, “Many people coming to Australia were escaping people from their own country, not just escaping governments.”

In the Middle East it’s often fleeing Islam, or the majority Islamic sect.

“Those who escaped communism in eastern Europe were not happy with those who later came to Australia who had lived under the communist state. They represent what they wanted to leave behind.”

“I’ve worked hard, not for my taxes to pay their dole,” is a common attitude.

The next person I spoke to was John Batour, a mixed business owner who arrived from Lebanon 43 years ago and tells me proudly that he works 17 hours a day. He’s a straight shooter.

“They are costing us $1.2 billion a year, that’s why we don’t want asylum seekers here. They sit on unemployment, Housing Commission, they live off our taxes and everything costs us more.”

But Dr Jupp says the idea that refugees and migrants come here just to enjoy our welfare services is unfair and inaccurate. They come here to get a job, a home and a better life for their kids.

“In terms of welfare, there are figures from the immigration department… and those who fit under the humanitarian category have a longer period before finding employment, usually a year. That’s largely due to skills and language,” he says

“They cause trouble”, it’s said.

Next I have a coffee with Polish refugee and seamstress Adrianna Bieda, who settled in Australia in 1990. She says she loves calling Australia “home” and doesn’t want to ruin “a good country” by having allowing more refugees in.

She says: “They cause all the trouble, and ruin it for us good people.”

I pass on this concern to Dr Jupp who says the argument can’t be validated by fact.

“We just can’t get those figures, as each prison system is managed by individual states and territories and some choose not to record the birth country of their inmates. What we do know is that Indigenous people are over-represented and they were born here.”

While most of the data is inadequate, it’s indisputable that some men of Middle Eastern and Vietnamese background are involved in the drug trade. However, these crimes are usually committed by 15-25 year olds and Dr Jupp says the majority of immigrants are older than that.

“So the increase in youth crime is not due to multiculturalism, because those committing it are nearly all born in Australia.”

When I suggested that the migrants I spoke to wanted what sounded like a return of the White Australia policy, Dr Jupp says he’s not surprised.

“It’s not uncommon for every wave of immigrants and refugees to be suspicious or unhappy of the next.”

He encourages Australians to note our achievements; to look at how well integration has worked here and the and social cohesion we have compared with other countries that have had to deal with mass migration such as Pakistan with its refugee population of 1.7 million or Spain where several race riots have erupted in the last decade.

He insists: “Multiculturalism is working. If you go to any of our capital cities and enjoy the entertainment, food, housing and fashion you can see that life is much better that it was 50 years ago. And that’s because we let people in.”

Perhaps I need to invite Dr. James Jupp to my next family BBQ.