A DAY FOR MOTHERS EVERYWHERE I don’t receive any gifts for Mother’s Day.

Sure, there are things I want, but they aren’t the things that are advertised for mums at this time of year.

The mums we see in the advertisements might represent about, what? Two percent of mums in our culture? Where are the Indian mums, the African mums, the Chinese mums and South American mums?

Not in the Mother’s Day catalogues. Where are the Goth mums, and Surfer mums and Heavy Metal mums?

Now, I’m none of those types of mums – I’m white and middle class – and I don’t relate to the mothers I see in advertisements.

I don’t identify with the well-groomed, feeling-harassed-but-gee-it’s-all-worth-it attitude. I imagine that not many mums identify with these women. And I don’t know how many mums really want a CD called Songs for Housework, or new kitchen appliances.

According to the advertisements, that’s what we buy mum for Mother’s Day. The way Mother’s Day is celebrated now you would think it was created by Hallmark. It wasn’t.

There is currently a movement to reclaim the original intention of Mother’s Day. The original Mothers’ Day was a Mothers’ Peace Day in 1873, a protest against the American Civil War, organised by Julia Ward Howe. She wrote a Mothers’ Day Proclamation in 1870.

Arise, then, women of this day! Arise all women who have hearts! Our sons shall not be taken from us to unlearn all that we have been able to teach them of charity, mercy, and patience… And up from the bosom of a devastated Earth, a voice goes up with our own.

In 1858 Ann Jarvis, a young homemaker of West Virginia, organised the first Mothers’ Work Days to improve sanitation and stop disease. She organised women on both sides during the Civil War. Her daughter, Anna Jarvis, continued her work by campaigning for a memorial day for mothers. In 1907 at her mother’s memorial service she handed out 500 white carnations, her mother’s favourite flower.

The first Mothers’ Day service was held at the St. Andrew’s Episcopal Church on May 10, 1908.

On May 8, 1914, the US Congress passed a law designating the second Sunday in May to be Mother’s Day. Woodrow Wilson declared that American citizens show the flag to honour mothers whose sons had died in the war. 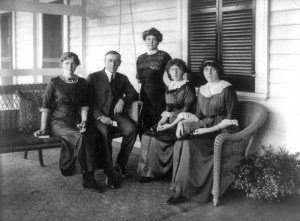 [Left: Woodrow Wilson with his wife and daughters, 1912.]

Later, when Anna Jarvis saw how commercialised the day had become, she tried to have it canceled.

She said: “A printed card means nothing except that you are too lazy to write to the woman who has done more for you than anyone in the world. And candy! You take a box to Mother – and then eat most of it yourself. A pretty sentiment!”

The apostrophe was moved to make it a celebration for individual mothers rather than recognizing the social good mothers can do collectively.

The history of maternal activism has largely been forgotten. Mother’s Day seems to be a good time to remember.