A CURE FOR GREY HAIR

Thanks to a team of European scientists, grey hair may soon become a thing of the past… but would you truly want to permanently reverse the ageing process that sprouts out of the top of your head? 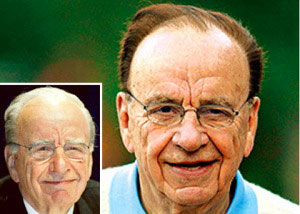 Imagine all the beautiful white-haired older people you know – now imagine their beautiful older person faces with their young person hair (try not to think of Rupert Murdoch’s bad hair dye job from a couple of years ago as you do this.)

According to In a new research report published online in The FASEB Journal people who are going grey “develop massive oxidative stress via accumulation of hydrogen peroxide in the hair follicle, which causes our hair to bleach itself from the inside out.”

Most importantly, says the report, this massive accumulation of hydrogen peroxide can be remedied with a “proprietary treatment developed by the researchers described as a topical, UVB-activated compound called PC-KUS (a modified pseudocatalase).”

Whatever that is. The short story is that messy hair dyes may be a thing of the past.

(The new research shows the same treatment would work for the skin pigmentation condition, vitiligo.)

Although your first instinct might be yes, when can I get it – would you really want to stop the natural ageing process?