IT’S NOT ABOUT THE BREAST, OKAY? What has topless sunbathing got to do with breastfeeding, exactly?

If you’re David Koch, and you’ve created a controversy by airing your outdated comments about breastfeeding on air, then a topless sunbathing analogy is one way to keep digging your grave. Keep going, Kochie.

Koch was confronted this morning by a nurse-in at the Martin Place studios of the Sunrise program, where about 40 breastfeeding mothers gathered to peacefully protest against Koch’s controversial comment last week that it was okay for women to breastfeed in public (thanks, David) as long as it was “classy.”

Koch’s comments followed the outrageous case a week earlier of Liana Webster, who was asked to leave the Bribie Island Aquatic Centre when she decided to feed her 11 month old baby poolside.

The centre has since apologised, as they should, because breastfeeding in public is not illegal.

Turns out David meant “discreet” and on his program this morning he didn’t resile from his opinion.

Breastfeeding is not about the breast, it’s about the feeding. It’s not a “phwoar” moment, and it’s not offensive, except in the minds of those who should be ignored.

Rebecca Perrin from Tempe joined the nurse-in – organised by anti-sexism group Destroy The Joint – and said that the whole controversy was about victim blaming: “It seems that when a basic human right is violated it becomes about finding blame in the woman.”

“Should women be more discreet?” was the question posed by Sunrise. 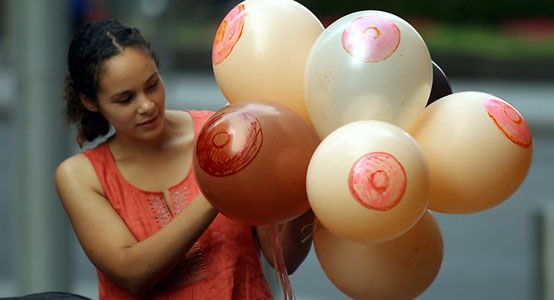 Should nursing mothers be more discreet? Perhaps Grant Denyer should be? Photo by John Grainger – The Daily Telegraph.

Frankly, the question they should be asking is: “should we have a word to weatherman Grant Denyer about his puerile, schoolboyish attitude to breasts?”

Just before the breastfeeding story went to air this morning, Denyer broadcast his live cross standing between two domed buildings (breasts, geddit?) while he make lame double entendres (“I’ll keep you abreast of things,” geddit?) and made his hands look like he was squeezing the “breasts” he was standing between. Oh please.

It’s no wonder offensive attitudes about one of life’s most basic and necessary acts abound when viewers are still subjected to such embarrassing crap. Shame Sunrise is such a “high traffic area” – they really need to be a bit classier about their attitudes.

Have you tuned into this controversy? What do you think?