MEMO: MARGIE ABBOTT IS MORE THAN HER WAISTLINE 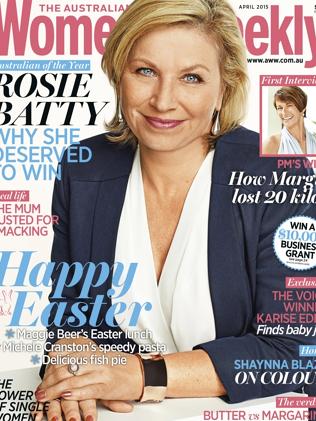 If you’re wondering what’s wrong with the state of Australia’s women, take a look at the front cover of our best-selling magazine.

It features one of our most powerful women: highly intelligent, hard-working, and hugely influential. Margie Abbott has a successful career, three children, and the ear of the Prime Minister.

The “First Lady” – a term she despises – is not a decorative item her husband occasionally chooses to wear. But, according to the Australian Women’s Weekly, the most interesting revelation from her first major interview is this: “How Margie Lost 20 Kilos.”

Really, is that the best you can do? Reducing a woman to the sum of her body parts? Please! In an appalling irony, the cover line is written on the shoulder of an image of Rosie Batty, who is using her profile as Australian of the Year to draw a link between the dis-empowerment of women and domestic violence.

Inside the magazine, there’s a wealth of weighty quotes.

Like this, from a family friend: “Margie is best described as very much her own woman, with her own ideas and her own life.”

Or this, from the woman herself : “I wouldn’t say it’s a role I relish.”

These are fascinating insights into a modern woman, managing as best she can. But it doesn’t matter what we achieve: women are still valued for how they look.

As the author John Berger once said, “men act and women appear”. How many times have you bumped into an acquaintance who’s burst out with, “Wow, you look great! Have you lost weight?” Or, if you’ve put on weight, “It’s really good to see you!” as if fat is the truth that dare not speak its name.

In the body of the article, Ms. Abbott says she took up cycling after doctors warned about Type 2 diabetes. Instead, the cover line misrepresents her as a starlet on a fad diet. As we know from our consumption of women’s magazines, it’s good to be thin: It means we take up less space, to correspond with our lack of power.

None of this was surprising back in 1991 when the book was written. But to see it on the front cover of our best-selling magazine, in 2015? Next to, “Rosie Batty: Why She Deserved To Win”, as if someone suggested she didn’t? Aimed at 2-million-plus women, aged between 25 and 54?

The so-called ‘First Bloke’, Tim Mathieson, was never subjected to such scrutiny; it was different for his daughters.

Frankly, this reflects Tony Abbott’s Australia: housewives doing the ironing; abortion being an easy way out; and women being inferior for physiological reasons.

Now, I’ve had the privilege of spending time with Margie Abbott.

So, here are some suggestions for the AWW’s  headline writers:

It’s Not a Role I Relish: Margie on Independence. (Even just the first half is an intriguing hook.)

Margie’s Most Gruelling Experience (No, it’s not being married to Tony; it’s walking the Kokoda Trail.)

Never Go on a Blind Date (Ah, just having a bit of fun with that one!)